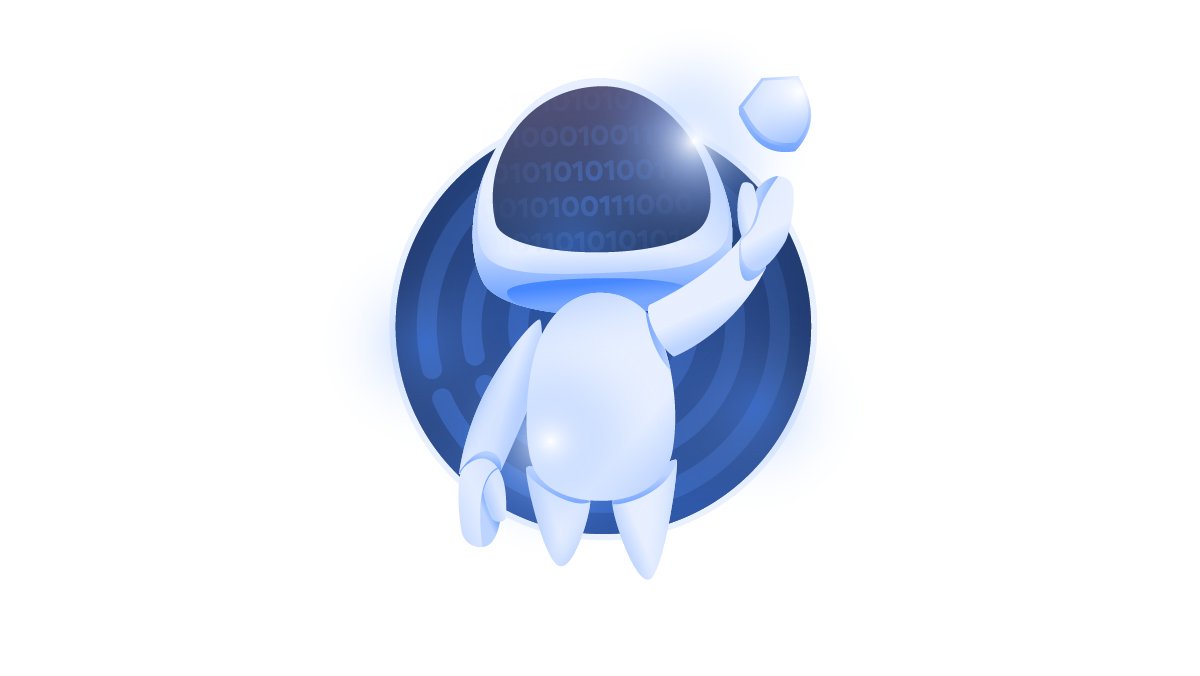 What is a VPN protocol?

Virtual Private Networks (VPNs) and VPN protocols are not the same thing. NordVPN, for example, is a VPN service that lets users choose from a number of different VPN protocols depending on their needs and the device they’re using.

A VPN transmits your online traffic through encrypted tunnels to VPN servers that assign your device a new IP address. VPN protocols are sets of programs and processes that determine how that tunnel is actually formed. Each one is a different solution to the problem of secure, private, and somewhat anonymous internet communication.

No VPN protocol is perfect. Each may have potential vulnerabilities, documented or yet to be discovered, that may or may not compromise your security. Let’s delve into each protocol’s pros and cons.

How many types of VPNs are there?

There are two types of VPNs:

Protocols are the driving forces of VPNs. Here are six common VPN protocols along with their pros and cons.

OpenVPN is a very popular and highly secure protocol used by many VPN providers. It runs on either the TCP or UDP internet protocol. The former will guarantee that your data will be delivered in full and in the right order while the latter will focus on faster speeds. Many VPNs, including NordVPN, will let you choose between the two.

When to use it: OpenVPN is irreplaceable when you need top-notch security: connecting to public Wi-Fi, logging into your company’s database, or using banking services. 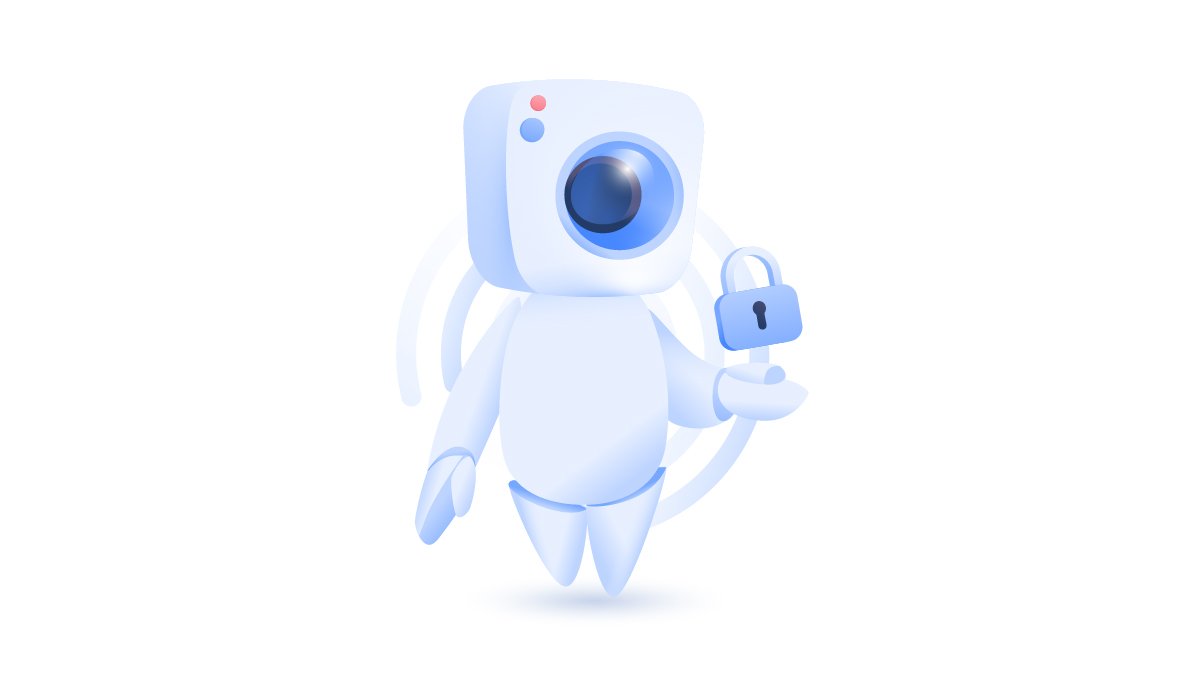 IKEv2 sets the foundation for a secure VPN connection by establishing an authenticated and encrypted connection. It was developed by Microsoft and Cisco to be fast, stable, and secure. It succeeds on all of these fronts, but where it really shines is its stability. As part of the IPSec internet security toolbox, IKEv2 uses other IPSec tools to provide comprehensive VPN coverage.

When to use it: IPSec/IKEv2 stability guarantees that you won’t lose your VPN connection when switching from Wi-Fi to mobile data, so it could be a good choice when you’re on the move. It also quickly bypasses firewalls and can offer high speeds on streaming platforms. 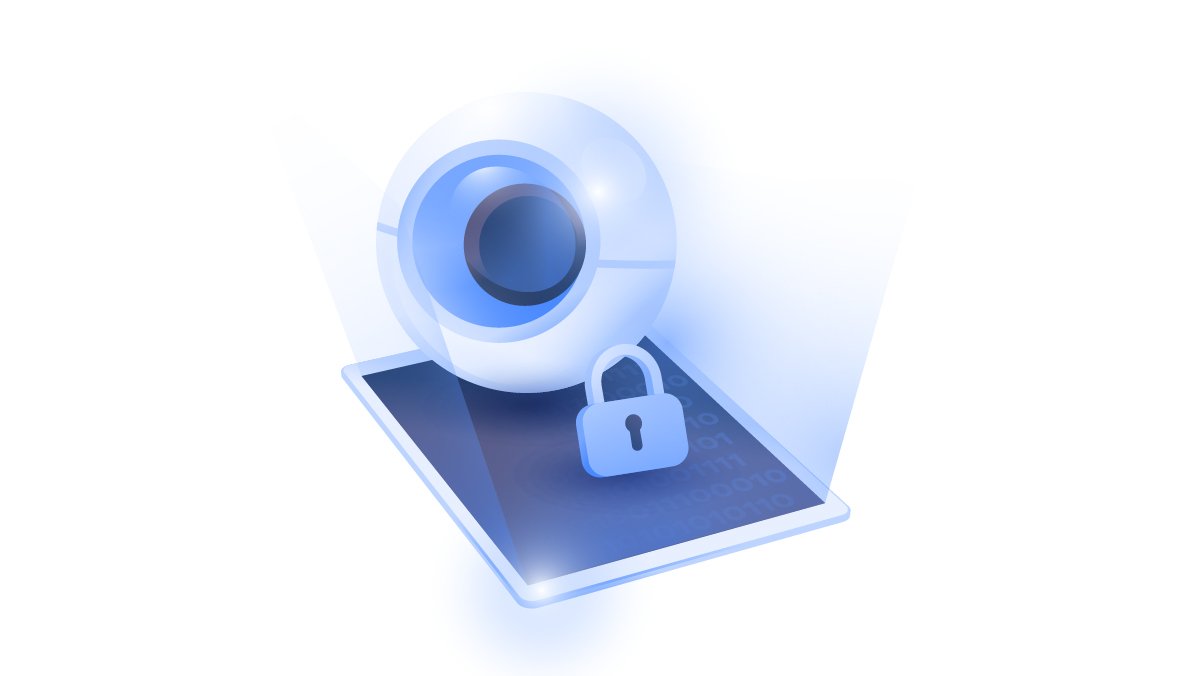 Wireguard is the newest and fastest tunnelling protocol the entire VPN industry is talking about. It uses state-of-the-art cryptography that outshines the current leaders – OpenVPN and IPSec/IKEv2. However, it’s still considered experimental, so VPN providers need to look for new solutions (like NordLynx by NordVPN) to overcome Wireguard’s vulnerabilities.

When to use it: Use Wireguard whenever speed is a priority: streaming, online gaming, or downloading large files. 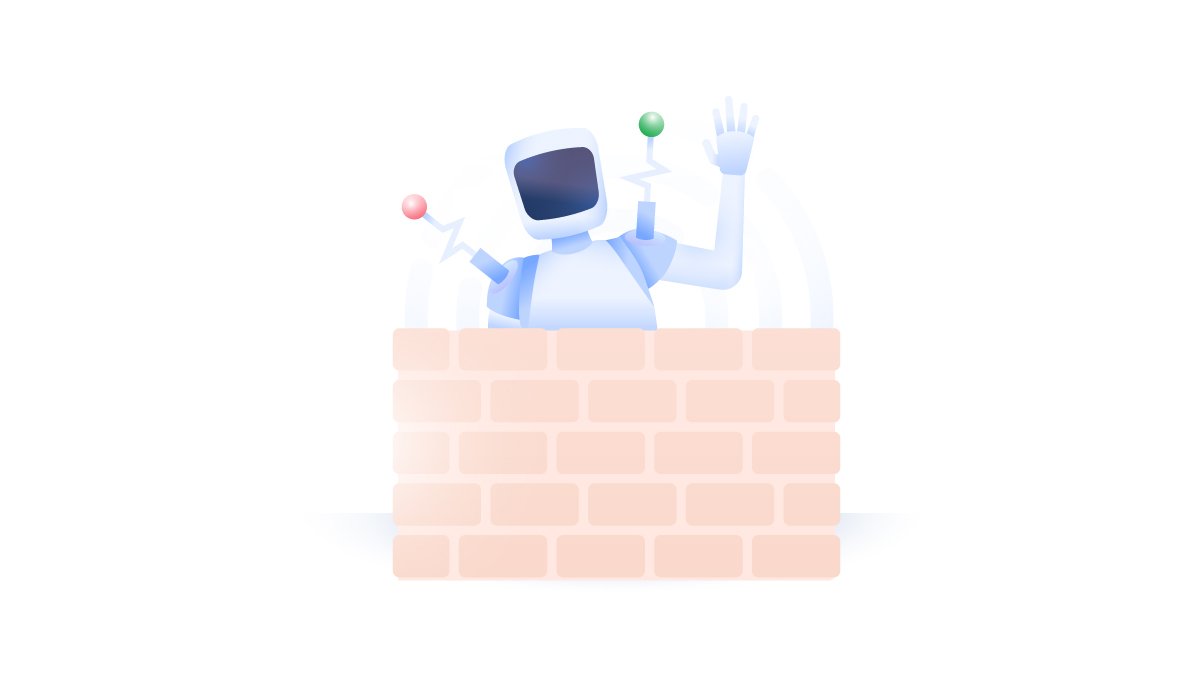 Secure Socket Tunneling Protocol (SSTP) is a fairly secure and capable VPN protocol created by Microsoft. It has its upsides and downsides, meaning that each user has to decide for themselves whether this protocol is worth using it. Despite being a primarily Microsoft product, SSTP is available on other systems besides Windows.

When to use it: SSTP is good for bypassing geo-restrictions and enhancing privacy while browsing the internet. 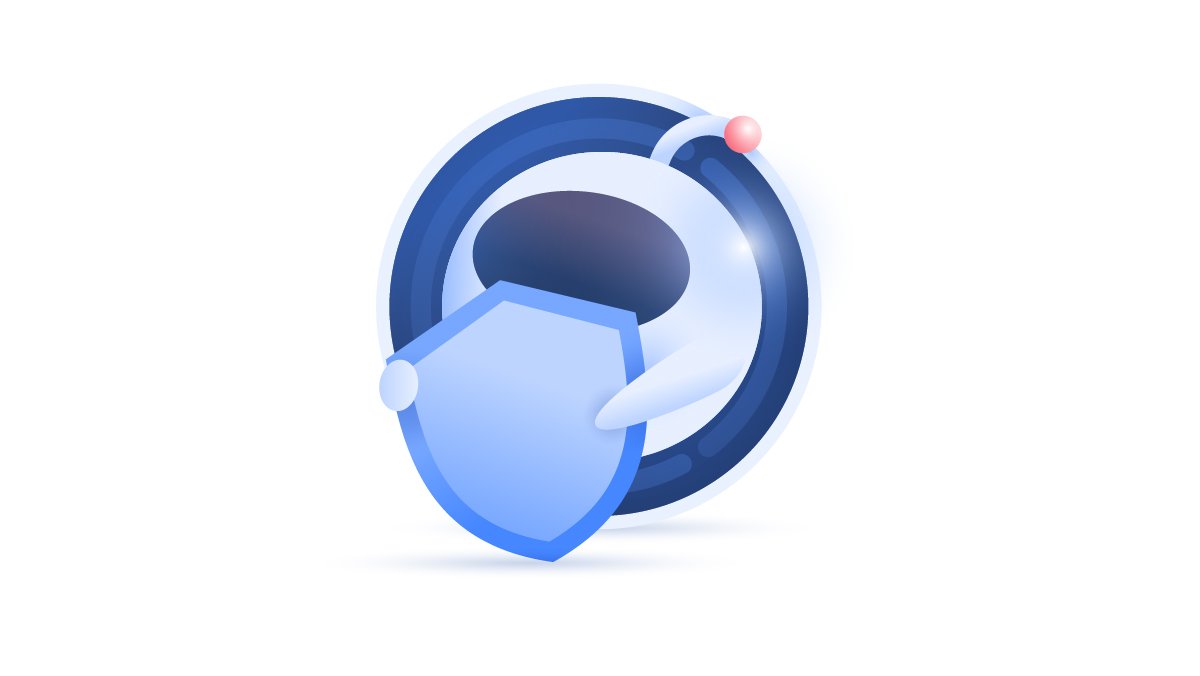 Layer 2 tunneling protocol (L2TP) doesn’t actually provide any encryption or authentication – it’s simply a VPN tunneling protocol that creates a connection between you and a VPN server. It relies on the other tools in the IPSec suite to encrypt your traffic and keep it private and secure. This protocol has a few convenient features, but certain issues prevent it from being a leading VPN protocol. (NordVPN no longer supports L2TP.)

When to use it: You can use L2TP to securely shop online and perform banking operations. It is also beneficial when you want to connect several company branches into one network. 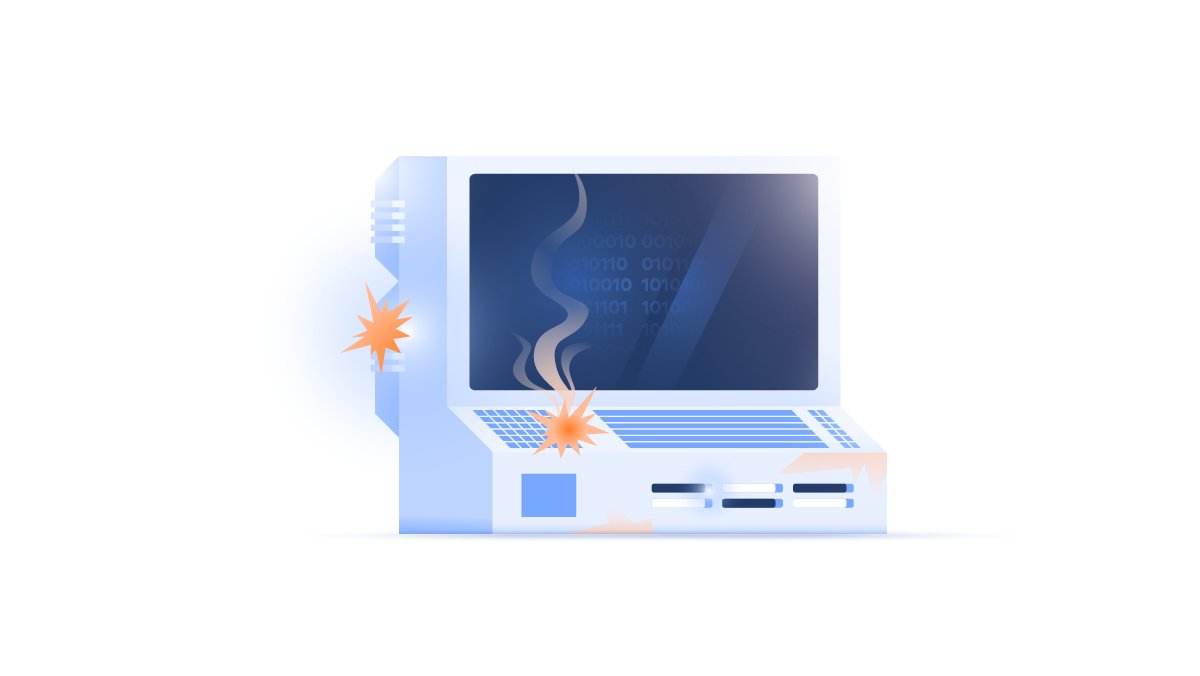 Point to Point Tunneling Protocol (PPTP) was created in 1999 and was the first widely available VPN protocol. It was first designed to tunnel dialup traffic! It uses some of the weakest encryption protocols of any VPN protocol on this list and has plenty of security vulnerabilities. (NordVPN also no longer supports PPTP.)

When to use it: We recommend using PPTP only for streaming or accessing geo-blocked content. For anything else, you should use more advanced VPN protocols. 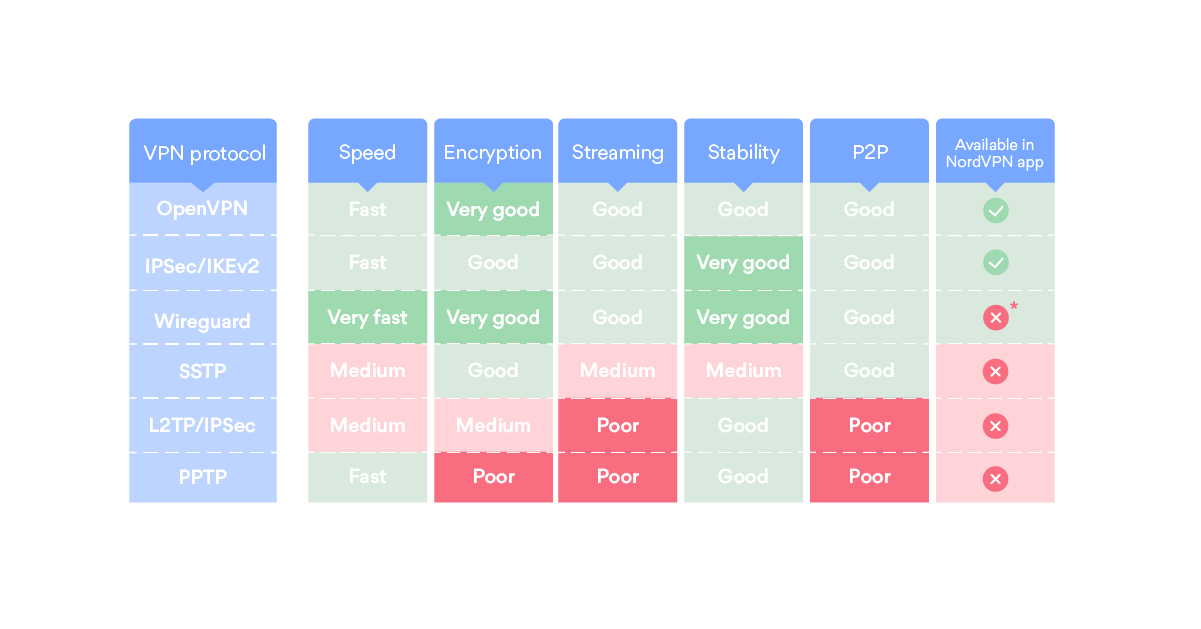 * Our NordLynx protocol is built around WireGuard and you can find it on the NordVPN app.

What is the best VPN protocol?

There is no such thing as the best VPN protocol suitable for everyone. The answer to this question depends on your needs and what you do on the internet. If you’re an avid gamer, you probably use VPN for different reasons than someone who watches a lot of TV shows or often works from cafes.

What is the fastest VPN protocol?

Wireguard is considered to be one of fastest VPN protocols, offering quicker connection/reconnection times and improved battery life for mobile devices. NordLynx by NordVPN couples Wireguard’s speed with enhanced security. IKEv2/IPsec is also considered a fast protocol and it may serve the needs of many.

What is the most secure VPN protocol?

Many VPN experts recommend OpenVPN as the most secure protocol. It uses 256-bit encryption as a default but also offers other ciphers such as 3DES (triple data encryption standard), Blowfish, CAST-128, and AES (Advanced Encryption Standard).

What is the most stable VPN protocol?

IKEv2/IPsec is considered to be the most stable VPN protocol as it provides a strong connection and allows users to switch between networks without risking their security.

What is the easiest VPN protocol to set up?

PPTP protocol is built into many devices, making it one of easiest protocols to set up. However, since it is outdated and is well-known for security issues, we don’t recommend using it. Look into other options such as Wireguard or IKEv2/IPsec.

VPN services like NordVPN set up the protocols for you so you don’t need to worry about tweaking them for better performance. However, you can switch to another protocol on NordVPN app with just a couple of clicks.

Enhance your security and take the best out of VPN protocols.